Anyways, so sorry for the long disappearing act.
Unfortunately my computer died (RIP old friend), carrying in its belly all my manuscripts, and of course, I almost died 5 minutes later when my mind finally caught up with what was happening (and yeah, I have backups on pens and so on but since I’ve been reviewing them, well … let’s just say that I hadn’t updated my backups in a few looong days).

So I quickly took it to the doctor who smiled and said, no problem, this will be fixed in 3 to 4 days. I was all happy and relieved and skipped like a school girl all the way back home. Returned to the doctor’s office 3 days later to see how my partner was doing … Well, the doctor had gone on vacations, like, door closed and no one inside, and a stupid paper glued to the door saying with an annoying smile that he would be back in 20 days. 20 days!! Computer doctors must make a fortune. I too want to go on vacations for 20 days …. >_> Worst of all? I could see my computer on the inside, on top of a pile of other waiting patients. So yeah, no computer for 20 days … (Die liar doctor!!)

Returned home and reverted to old methods: write on paper (I hate writing on smartphones, and hate even more reading on them. My eyes get really tired and I literally start seeing small dots and stars everywhere. Not good at all). Eventually I too took a few days and went camping (I love camping). When I came back the good doctor was back from his long vacations and with an annoying smile told me he had opened up my partner and that he could see that it was dead, but that he had other patients in line, before mine, and I had to wait until he had the time to try and recover my data … I’d just came back from a relaxing time by the lake and almost had a heart attack. Try and recover my data??? Try????

In any case, my next mission was clear. Try and find a new computer that would fit my small, small budget. And prey to all the Gods and Goddesses that my data could be recovered.

Then my Grandpa died. He was really old and had been sick for a year now, so, though it was sad, it was expected. Still, if you’ve seen yourself in a situation like this and had to take care of all the proceedings regarding to such events, you can imagine the time and work the death of a family member implies. Plan the funeral, contact family and friends, decide on a million stupid things, go to the police (because he died at home), decide on the kind of service. Then came the worst part, the house. Moving everything out, giving away clothes and other objects, cleaning the place so it could be returned to the landlord. Now I still have the rest of the bureaucracy to take care of; the declarations, papers, and whatnot, also the heirs claims, even though there’s really nothing to be inherited … But then, he did have an old, old laptop *_* And so I convinced the rest of the family to take it with me. It’s old, and slow, and is missing a few keyboards (the ‘B’ is nowhere to be found -_-) but it connects to the internet and has a word processor *_* So yeah, it will have to do until I have enough money to buy a new one (just hope it doesn’t die too T_T).

Also the good damned doctor finally handed me a pendrive with my docs inside, my manuscripts among them -_- Damn. I’ve already copied them to 3 different pens …

So here I am, finally back after this long, hellish days. Back to work too T_T Trying to squeeze a few minutes of writing between shifts.

How were your vacations? Better than mine, I hope … >_>

In any case, I hope you’re not too angry with my absence. I promise to start updating my books as soon as possible.

Wish you all wonderful readings,
All the best,

Liked it? Take a second to support Sophia CarPerSanti on Patreon! 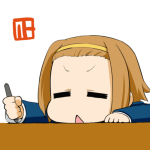 Sophia CarPerSanti was born with her mind lost in another world. Not too strangely, writing is her only passion, and so there's not much one can do to correct that.

Help us Keep this Site Online!

Do you enjoy reading our books?
Then help us keep this site online.
All help, no matter how small,
is welcome!

Support Moment by Moment on Patreon!